4-7-18 Just learned how to add to blog posts today! Its not at all the same pattern as updating a page. All so confusing for a non-tech person like myself!

April 2018 is the month for our annual health clinic. This year we have discovered another clinic in the fall we are going to try and get into. Some of the moms have babies, or are due to deliver soon so they need to stay home. We would like them to be able to go this fall so they don’t miss this years testing. In fact Billie Jo, Blossom and Jolie are all due the same weekend as the clinic. I have already warned my son he gets to do midwife duty if anyone is in labor. Art, Aryne, uncle Al and I will all be needed at the clinic.

The kennel club who hosts the clinic is just wonderful. They fill out the OFA paperwork for us ahead of time. When we get there I hand various people dogs. Uncle Al, and Art often hold a dog waiting for either the cardiologist, or the ophthalmologist to have an open door and no one in line. If no one else is waiting they take one of our dogs in. We keep the Dr’s busy so they aren’t just standing around waiting for the next client. Then their time is used efficiently. Another person from the clinic comes to get dogs needing rabies shots and/ or brucellosis tests. All intact males must have a brucellosis test every year. The first rabies shot a pup gets is always a 1 year rabies shot. After that they can get a 3 year rabies shot so not all dogs need a rabies shot.

Kim is so much better on the computer so she has taken over my messy hand written notes on who needs what and put it all on a spread sheet. It is so organized! She even had all the dogs who needed vaccinations on there for us to use as a check list. I have a chart and index cards I use which works really well for me but apparently it doesn’t make sense to anyone else. She has been brainstorming ideas that would be logical for anyone to understand, not just me. 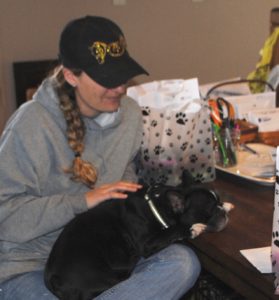 Kim trying to work on paperwork, but Karrie wants to be held instead 🙂

I like the dogs to also have their core vaccinations current and given 1 month to a bare minimum of 2 weeks prior to going to the clinic. Then if someone has a sick dog ours are not as likely to get sick.

No vaccination should be given within 2 weeks of another vaccination. Since some of the dogs will get a rabies vaccinations at the clinic its easier to just be sure any who need vaccinations get them ahead of time. With the 2 new flu diseases spreading that no dog is resistant too we also give them the flu vaccinations. That was the most confusing to keep straight. Dogs who went last year mostly had the flu vaccinations. Since it is a new shot they need to get 1, and then 3 weeks later get the booster for the very first time. After that initial set it is once a year vaccination like most of the others.

So dogs who had the flu shot last year only needed 1 this year. Those who had not had them, mostly younger puppies/ dogs we kept for potential new parent dogs, or new dogs needed the 2 set series. We had to plan farther ahead as they needed to be spaced 3 weeks apart and still not less then a full 2 weeks before the clinic.  The clinic is now 1 week away. All the dogs going (who are not pregnant) have had their vaccinations.

It also coincides with spring and a potential hot sunny day. I am working on giving all the furry dogs a hair cut. Some years its so hot we have air-conditioning on. Other years its chilly. Its easier to run the heat and in a crate they stay warm anyway then trying to keep them cool if its hot and sunny. I again tried to use clippers. Sometimes they work sometimes they don’t. I currently gave up and am using scissors on everyone. Not the prettiest but its time for the heavy winter coats to be trimmed up and thinned out! Spring has sprung! Meanwhile we of course have to keep up with all the puppies, basic feeding, watering walking, cleaning, chores. I am so glad I love my job. 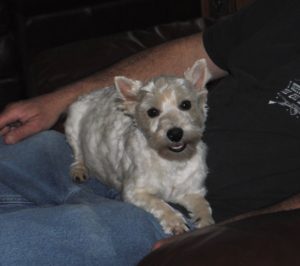 Marley, short hair cut ready to have her first litter of puppies! She is my grandson, Mavericks girl. She sleeps with him every night. 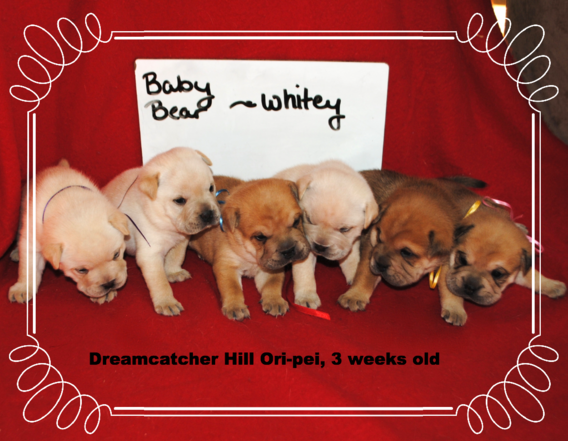 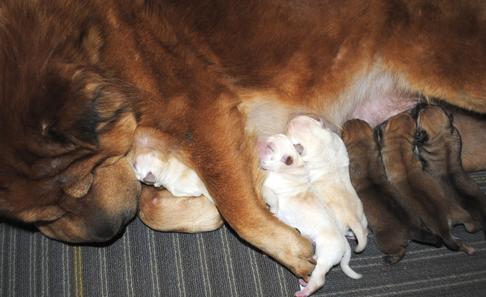